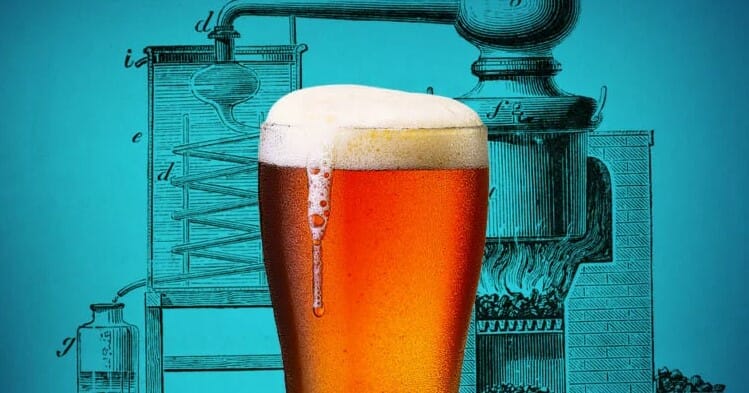 Beer is one of the oldest beverages humans have produced, dating back to at least 5000 BC in Iran. This ancient drink was born in the Middle East, and Mesopotamia is now the 3rd most popular drink in the World. To better learn the modern beer, we first need to understand what ancient beer is. So, let’s dive into its history to discover the differences between ancient beer vs modern beer.

In ancient Mesopotamia, clay tablets indicate that most brewers were probably women. Brewing was a fairly well-respected occupation during the time. It was the only profession in Mesopotamia that derived social sanction and divine protection from female deities/goddesses. Also, Sumerians tablets indicate that there used to be communal bowls where people drank beer out of reed straws.

Did you know? During the building of the Great Pyramids in Giza, Egypt, each worker got a daily ration of four to five liters of beer, which served as both nutrition and refreshment that was crucial to the pyramids’ construction.

When it comes to ingredients, there are fundamental changes. Barley was and still is the main element of most beers. However, in ancient times, the grains were often cooked too much during the malting process until they got burnt. This means ancient beer always had a roasted flavor. It is a different story today; grain malting is an exact science. Breweries can produce tons of beer with light color and flavor for a deliciously crisp modern taste without compromising on malting.

However, when it comes to hopes, it is a fairly new habit for the beer industry. Thanks to Christian Monks in the Middle Ages, humanity started to use hops in the beer. As we mentioned in the evolution of beer dispensers, Christian monks were the early frontiers for beer storage. It just so happens that hops are a great way to preserve the beer longer and add flavor.

Yeast is also one of the other latecomers. Although, it wasn’t discovered until 1857. A French microbiologist, Louis Pasteur, proved that alcoholic fermentation was conducted by living yeasts and not by a chemical catalyst. Pasteur also discovered a new way to kill bacteria and other harmful organisms. He prevented spoilage by heating up beer or wine. This technique, now called Pasteurization, is still used today.

Refrigeration is also a fairly recent invention in the history of beer. Carl von Linde, working for the Spaten Brewery in Munich, invented Mechanical refrigeration specifically for brewing in 1873 -Spaten still makes delicious beer today.- In addition to year-round brewing, refrigeration allowed for the expanded availability of the colder-processed lager beers versus warm-fermented ales. Breweries could be larger and further from natural ice sources. The invention of mechanical refrigeration was a critical factor in the spread and later dominance of lager brewing worldwide.

Ancient beer has come a long way to get where it is today, from a clay pot of barley gruel to a crisp, cold, carbonated, and refreshing beverage. Ancient beer vs modern beer is crucially different. Today, Pubinno creates the most technologically advanced version of modern beer. To check out how this ancient drink is modernized and embedded in an ecosystem called the Internet of Beer by Pubinno, click here!

Perfect Beer Talks is getting more perfect every time, now with its 4th episode! Starting with Pub Culture and History with Tara Turin and talking about the Digital Transformation of the Beer Industry with Jason Lambert, we are now ready to take a glance at the Future of Beer. 2 amazing guys from Molson Coors Beverage Company, Chad Wodskow, and Matthew Geary hosted by our CEO Can Algul for this thrilling episode.