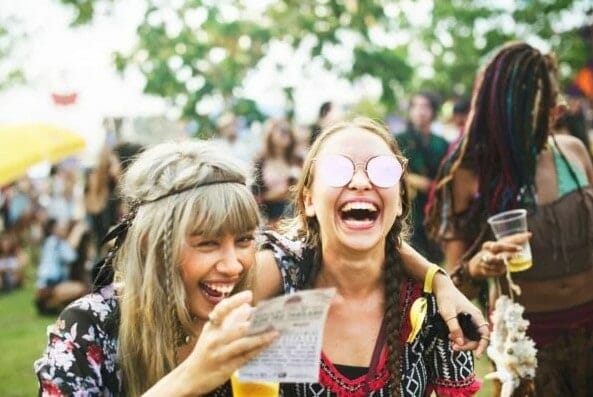 As summer comes, it notifies us about festivals coming. Why do we love that much festival? Because it gives us chance to listen live music as we are dancing in the open air and drink while we are with our friends. The air around us is fresh, the beer we drink is cold, the nights we stand up for it are long… But the concept of festivals wasn’t same during years. With the changing life of young people, the understatement of “having fun” is changing too. The need to gather and enjoy music and fellowship has long been a central tenet of human beings. So, can we say is there a progression? Let’s have a quick look at it.

Glastonbury Festival
Farmer Michael Eavis began hosting an open-air festival on his farm in Pilton, Sommerset, in the 1970s. The festival became known as Glastonbury and it has now become the largest green space open air festival in the world, attracting more than 150,000 festival goers over 3 or 4 days each year.Festival is a five-day festival of contemporary performing arts that takes place near Pilton, Somerset. In addition to contemporary music, the festival hosts dance, comedy, theatre, circus, cabaret, and other arts.

After the wars or persistent events, people started to manifest or externalize their feelings with the help of solidarity and music. They just wanted to feel free and forget what they have been lived. Also different cultures generate different types of celebrations.

Maybe Woodstock is the one of the most known festival in the world. On 17 August in 1969, the grooviest event in music history draws to a close after three days of peace, love and rock ‘n’ roll in upstate New York. The line up was crazy too: A lot of celebrities took in the performances of acts like Janis Joplin, Arlo Guthrie, Joe Cocker, Joan Baez, Creedence Clearwater Revival, The Grateful Dead, Jefferson Airplane, Sly and the Family Stone and Crosby, Stills, Nash and Young.

Music festivals have exploded in the past 10 to 20 years. Also with the development of technology, the sound and visual systems got better in time. Nowadays, the festivals are a part of a visual feast.

That is one of the cultures specific to Ireland because the secret in the recipe of this coffee is whiskey! Irish people value pub culture greatly.

Nothing compares to a cold draft beer on a warm, summer day, and whether you’re involved in brewery management or simply an avid beer lover, one great way to highlight the unique notes in your favorite summer ales is to pair them with a delicious dish. When it comes to pairing your draft beers with food, certain spices and flavors fare way better with each other than others.